I called our city’s street department this morning to ask them (nicely!) when (or if) they plan on fixing an ongoing drainage problem in our neighborhood.

Like other neighbors who’ve called, I got the run-around.

Here’s what we’re dealing with: 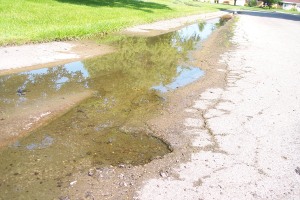 I don’t know about you, but I find this distasteful on several fronts:

As I said, this problem has been going on for years. There are tiles in the nearby fields, they tell me, that drain rainwater into our neighborhood (and a few neighbors add to it by washing cars, watering lawns, etc.).

Admittedly, we’ve had a LOT of rain. During June alone, we amassed something like 10 inches of the stuff.

But I took this picture this morning — and we haven’t had rain for days! In fact, it’s been exceedingly hot and sticky, so you’d have thought this mess would have evaporated.

When I explained to the street department my concerns, the woman answering the phone said they’ve had crews out to look, but they “don’t have a solution at this time.”

Sure, I’ve seen ’em out looking. But all they do is wave and drive by.

I asked if they couldn’t at least take a big sponge and sop up the water. No.

Couldn’t they hire a consultant to recommend an acceptable solution? No.

We pay taxes out here, hefty taxes, I pointed out. Sorry.

When I finally suggested calling the newspaper to have them investigate, she said, “I don’t know what they could do.”

I started back on the taxes and how much money the city throws away on useless consultants and the nastiness of the stagnant water and other stuff when I noticed she wasn’t there.

Probably laid the phone down and walked off.

Grrr, this makes me MAD!

And it doesn’t address our problem.

Anybody out there who’s succeeded in fighting city hall? I’d welcome your suggestions — and so would my neighbors.

4 thoughts on “Save my Neighborhood…Please!”