Have you ever heard of Moonflower?

Before this weekend, neither had I. Here’s what one looks like: 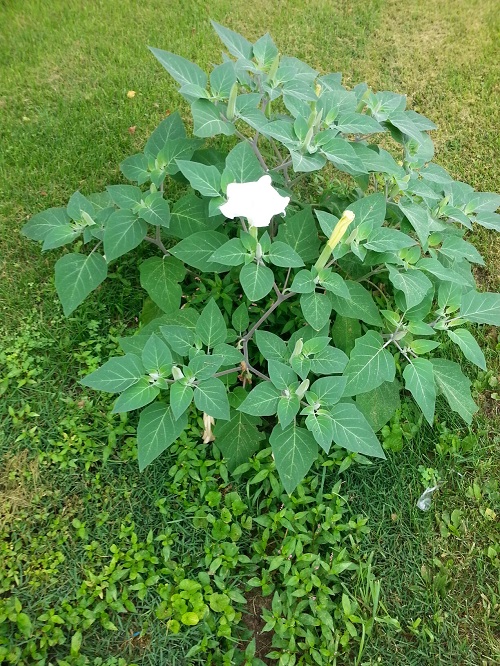 I’d long seen these plants in a yard Dallas and I pass on our daily walks, but frankly, I thought they were some kind of weed. Or maybe a squash.

Was I surprised when someone told me it’s called Moonflower, and the folks who planted it went all the way to Hawaii(?) to get the seeds. They’ve planted six to eight of them in a row alongside the road, but The Gardener’s Network says this is a vining plant and can grow 12-18 feet in a single year!

Most fascinating of all is that Moonflower blooms from dusk to dawn. Unlike my Hibiscus, which blooms during the daylight hours and folds up at night, the Moonflower “glows” during the evening, attracting moths and nighttime strollers.

Moonflower foliage is blue-green and smooth-textured (or so the experts say — I didn’t touch it). The white flowers are trumpet-shaped and grow to five inches in diameter. It’s a perennial in some climates and an annual in others, thriving in full sun and blooming until early fall.

Burpee, the seed people, says Moonflower is fragrant and easy to grow. Better Homes and Gardens says the reason I was able to photograph an open flower in daytime hours is that Moonflower blooms on overcast days until the sun starts shining.

Poor thing — with all the rain we’ve been having this spring and summer, it must be doing a LOT of blooming!

30 thoughts on “An Exotic Beauty”