Because there are so few turquoise-colored stones, one like Amazonite is particularly striking. 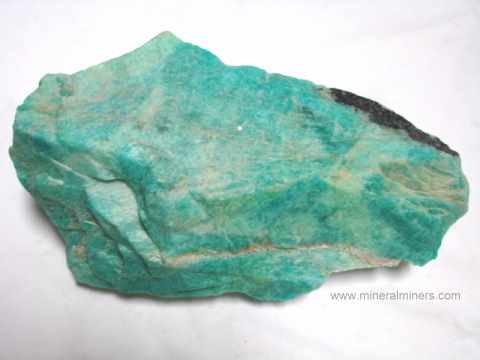 Thanks to http://www.mineralminers.com for this amazonite specimen

Ranging in color from light green to blue green — often with white veining — Amazonite is a member of the Feldspar family. It carries a 6-6.5 on the Mohs scale of hardness (1-10) and can be found in shades of white, yellow, pink, red, gray, or even colorless.

The presence of lead is what gives it its color.

Also known as the Stone of Courage and the Stone of Truth, Amazonite is believed to help you verbalize deep thoughts in a balanced way and to see more than one point of view.

Ancient peoples prized this turquoise beauty as an amulet stone. King Tut’s tomb contained several Amazonite treasures, including a scarab ring set in silver. Historians believe Amazonite was the third stone in the breastplate of the Jewish High Priest.

The name Amazonite comes from the Amazon River, though geologists don’t believe the stone was actually found there. Sources include Russia, the U.S., Madagascar, and Brazil.

Legend attributes its name to that of the ancient Amazon warrior women who adorned their shields with it, cured illnesses, and healed wounds.

Businesses can use Amazonite to attract new customers and protect against unfair business practices. Gamblers consider it a lucky stone. It stimulates artistic ability and creativity. Parents can hide it in a child’s bedroom to encourage tidiness. It blocks geopathic stress and protects against electromagnetic pollution. It’s believed to make married life happier. 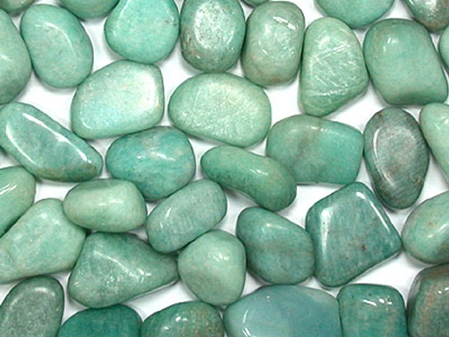 Amazonite stimulates the heart and throat chakras. It eases problems of the throat and thyroid and, as an elixir, is said to rectify a calcium deficiency, prevent hair loss, and clear acne.

Feng Shui experts say Amazonite’s energy is water, typically associated with the north area of a home or room.

Because Amazonite is easy to crack or chip, care must be taken with it. Don’t wear it during physical activity, and clean it with warm, soapy water. Store it apart from other jewelry.