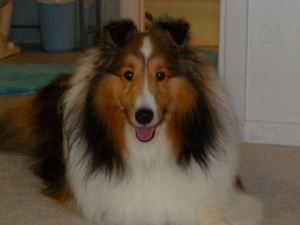 Does this look like the face of a dog who’d eat his own waste??

The fancy medical term for dogs eating poop is Coprophagia. The most common reaction from humans is, “Yuck!”

Experts theorize there are numerous reasons why a dog might eat poop (his own, or that of other animals):

One study also found that Fido is “trained” to eat poop by the very humans who find the habit so disgusting! It works like this: Fido takes a sample, Human shrieks and shoos him away; Human scoops up the waste and hides it in a bag. Fido becomes more curious about the hidden goodies. The next time he spots waste, he plays the old snatch-and-grab game, only faster to beat the Human from getting to the waste first. And a bad habit is formed.

I’ve had several dogs in my lifetime, but never have I had one that eats waste — until now.

‘Shelties are clean animals,’ his breeder swears. ‘Mine don’t do that.’

I’ve called my dog’s vet several times about this disgusting habit. The docs and their staff don’t seem concerned.

Probably because they’re not the ones seeing him do it, nor are they the ones the dog wants to kiss later on!

They suggested I purchase packets of For-Bid, to sprinkle on his food and keep him from sampling his waste. But that would only work on his waste, right?

And I’m already slipping bits of pineapple into his food, to little avail (pineapple is supposed to come out with a bad taste and scent to dogs).

Some suggest adding hot sauce to the waste once it’s out. Wouldn’t it just be easier to pick the stuff up, away from the dog’s line of vision?

I’ve done everything I can think of — keep him exercised, feed him a good-quality dog food, and regularly pick up the yard.

I’m open to suggestions. Fire away, and I’ll be ever grateful if we can break this bad habit.