I’ll be the first to admit I’m not an art critic.

But even somebody who does good to draw stick people is able to recognize what she likes.

Take a look at the following picture, for example: 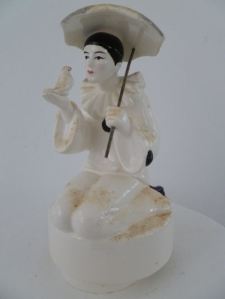 This little statuette depicts a clown (or mime) kneeling on a stand of some sort, holding a parasol in one hand and a bird in the other. If you turn the circular base, it plays a somewhat scratchy version of Stephen Sondheim’s “Send in the Clowns” from the Broadway musical A Little Night Music.

Lovely song. Sad. A song of regret and the disappointments of life.

But as people who know me realize by now — Clowns. Creep. Me. Out.

I don’t have a true phobia (panic attacks, heart racing, etc.), but I don’t like them. And if I have to bypass attending the circus when it comes to town, well, that’s okay.

Fear of clowns, called “Coulrophobia,” is actually more common than one might think. Some say it’s because clowns — with their made-up facial expressions — are able to mask what they’re really feeling.

That works for me.

Others blame it on scary novels about killer clowns like Stephen King’s “It,” or on real killers like John Wayne Gacy.

That makes sense, too.

There’s a ginormous word for fear of mimes — Metamfiezomaiophobia. That, too, is supposed to be related to their blank expressions, monochromatic wardrobe choices, and pantomiming expressions.

Psychologists can theorize all they want as to the reasons people fear clowns or mimes. And they can try every trick in the book to eradicate it in those who find such fear paralyzing.

I found this statuette lurking in one of my mom’s closets during a trip to her Gulfport, MS, house. By the looks of it (and the dust clinging to it), it’s been in there for a while.

Don’t say I told you so, but my guess is Domer put it in there when he was a child (or had me stash it there for him).

Somebody well-versed in objects like this (Antiques Roadshow, perhaps) might consider it a gold mine, but I don’t want it.

I don’t want anything to do with it!

So, Sis, if you’re reading, start looking for a place to exhibit Mr. Clown one of these days when you inherit him, okay? Because as far as I’m concerned, he’s got your name written all over him!

25 thoughts on “Here Comes The Clown”

"I would advise anyone who aspires to a writing career that before developing his talent he would be wise to develop a thick hide." -- Harper Lee
Loading Comments...
Comment
×