Today’s my only sister’s birthday — I won’t say how many because she’d kill me or retaliate.

That’s the way it is with siblings. We know which buttons to press.

Or not to press.

And it’s always been that way.

When we were little, sharing a room, we had an imaginary line running down its center.

One side for her. One for me.

As we grew, we got separate rooms, but she tended to find mine MUCH more interesting than hers.

Probably because of the diary I kept under lock and key.

Not that I had anything exciting to write in its pages, but she thought I did.

Or maybe because of my closet, with its neatly hung and folded clothes.

No matter that we weren’t the same size. Or had the same tastes.

She was a believer in sharing; I was not.

You can imagine the arguments! 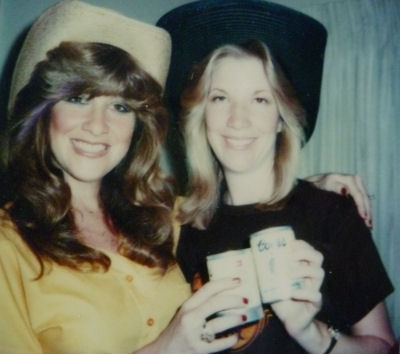 Sis and me after a trip to Texas way back when!

Some time after I left for college, we started becoming friends. Perhaps my late dad’s admonition, “You’ll always have each other” was making more sense.

For a while, we both worked in the same town. Across the street, actually.

And we’d share lunches and secrets, talk about “the ‘rents” and boyfriends, enjoy sun tanning by the pool and drinks on weekends.

I look on that time as idyllic.

Now we’re separated by some 700 miles, but we still manage to stay close.

Phone calls, e-mails, and such make it fairly easy.

Gone are the days when she’d snatch one of my sweaters and wear it to school, whether I approved or not. Gone, too, are the times I’d “rat” on her to our folks or we’d fight over whose turn it was to set the table.

Those two little girls have grown up and wonder of wonders, now they actually like each other.

21 thoughts on “Someone Special’s Celebrating”