Do not think because an accident hasn’t happened to you that it can’t happen. ~Safety saying, circa early 1900s 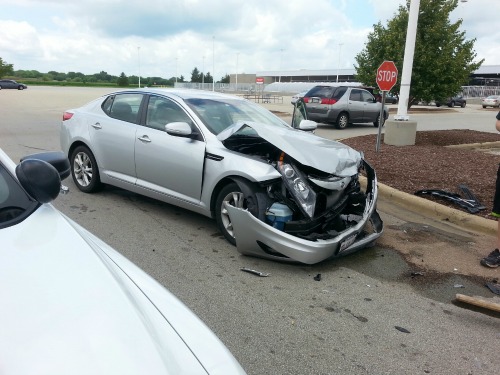 Yes, that was my Kia Optima.

I’d traveled 45 miles to take care of personal business and do a bit of shopping when the unexpected happened.

Heading north toward a big box store, I suddenly caught sight of something from my left eye and hit my brakes.

A woman was barreling through a Stop sign on a cross street, careened into the front of my car (driver’s side), and spun me 90 degrees to the right. She continued past me, climbing onto that graveled median, and only came to rest after her car had smashed into three parked cars.

You read that right — three.

My airbag deployed, filling the cabin with smoke and fumes and causing me to fear an explosion. I hopped out, ready to give her a tongue-lashing. A store employee on lunch break approached and was on her cell phone with 9-1-1. An ambulance, firetruck, and a couple of police cars arrived.

Eventually, I noticed my left forearm had a variety of scratches and was beginning to bruise. I refused transport to their hospital, preferring to return home to ours. (The verdict? No broken bones, no concussion; just abrasions and bruising).

The woman who caused this didn’t get a scratch … or a ticket (it occurred on private property), but as the ad says, There will still be pain. Try paying for damages to FIVE vehicles.

My insurance adjuster has been incredible. I met with him on Thursday, and together we went to the towing company to remove personal items from my car, which they’re totaling and sending to Kia Heaven. Sad, but as he reminded me, That car did its job; it sacrificed its life for yours.

So I’ve been dealing with insurance claims, rental cars, flashbacks, and various aches and pains. I’ve tried to lie low and recuperate.

And yes, avoid driving whenever possible.

Until my confidence returns.

Be careful out there, my friends!

32 thoughts on “Off to Kia Heaven”