Trouble falling asleep because your brain is working overtime? Feeling angry and out of sorts? Having tooth or bone issues?

Then grab some Howlite and prepare to be amazed!

Naturally colorless or opaque white with grey veins, Howlite was discovered in the 1800s by Canadian chemist Henry How. It’s a relatively soft stone — 3.5 on the 1-10 Mohs scale of hardness — so it takes color readily and is often dyed blue or green to mimic turquoise, or red to mimic coral.

Some unscrupulous merchants even try to pass off this beautiful but relatively inexpensive stone as the pricier turquoise or lapis.

The United States, especially California, is the source of most of the world’s Howlite. Its astrological signs are Gemini and Virgo, although it’s not listed as an official birthstone for any month.

Unlike some gemstones, Howlite isn’t cut into facets. Rather, it’s generally tumbled and polished, then cut into cabochons or drilled beads and fashioned into jewelry. It’s said to impart calmness to its wearer. When carried in your pocket, it’s said to diffuse your own anger  — or that directed toward you. 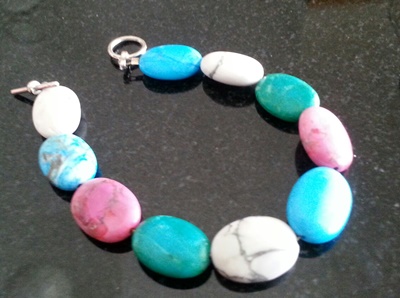 Dyed Howlite beaded bracelet (yep, one I made!)

Howlite dissolves in hydrochloric acid. Because it’s so soft, all that’s needed to clean it is a soft cloth and some soapy water. The use of ultrasonic cleaners isn’t advised. Store Howlite separate from other stones in a fabric-lined jewelry box.

Students can benefit from Howlite’s enhancement of the thirst for knowledge. The stone also aids in memory and recall of new information, as well as developing and mastering skills.

As with most things, a strong belief in the power of the stone is needed for its full effectiveness!