Look deep into nature, and then you will understand everything better. ~Albert Einstein, German-born theoretical physicist

Are you suffering from fear and anxiety? Need a dollop of self-confidence? Or maybe something to absorb the negative energy all around you?

Then find yourself some Tourmaline. 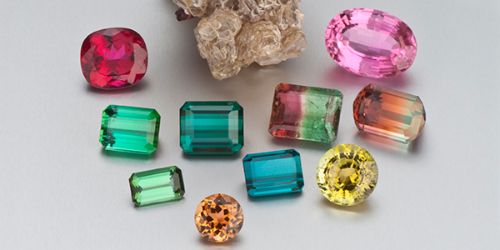 Some of the colors Tourmaline appears in. Image courtesy of the Jewelers of America.

Originally confused with other gems, Tourmaline encompasses a large group of boron silicate minerals that share chemical structure but vary in chemical composition.

Named from toramalli, meaning “mixed gems” in one of the Sri Lankan languages, Tourmaline wasn’t recognized as a distinct gem until the 1800s. Appearing in vibrant shades ranging from pink, peach, and red to yellow, emerald, black, and blue, Tourmaline also shows up in combinations of colors, the most popular being a blend of pink and green known as “watermelon” Tourmaline.

According to Egyptian legend, Tourmaline traveled from the center of the Earth through a rainbow, thereby claiming all those colors as its own. Shaman from African, Native American, and Aboriginal tribes used Tourmaline for healing and protection. Ancient Romans used Tourmaline to induce tranquil sleep. 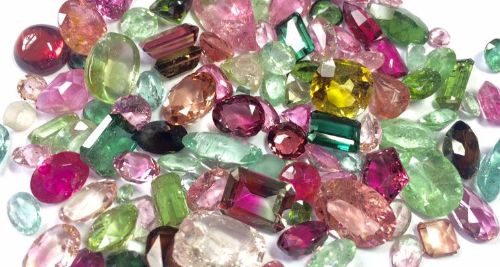 Tourmaline is called the rainbow jewel of the gem world. These colored stones are courtesy of the Gemmological Association of Great Britain.

With a 7 to 7.5 on the Mohs Scale of Hardness (ranging from 1 to 10), Tourmaline is sufficiently durable for use in jewelry. Its popularity has soared since the 1990s — so has its price. In fact, a form of Tourmaline from Brazil called Paraiba (featuring vivid blues, greens, and violets) can command more than $10,000 per carat! 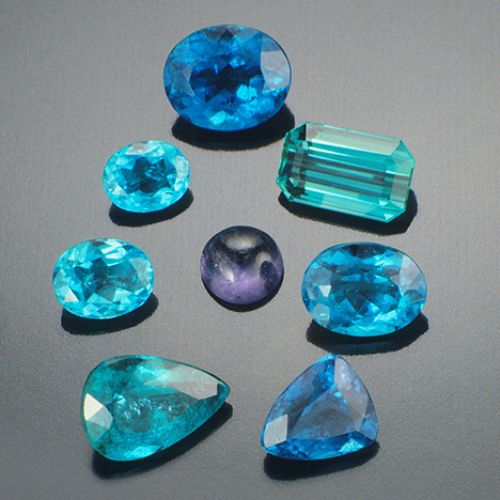 Faceted and polished Tourmaline from 0.39 to 1.46 ct from Brazil’s Paraiba State (photo courtesy of the GIA)

A popular stone, Tourmaline is readily found in jewelry stores. It’s a birthstone for the month of October and the traditional stone for an eighth anniversary.

Tourmalines are said to be excellent for balancing the Chakras. As you would expect, the varying shades correspond to the many colors of the Chakras: red-violet for the Root, orange for Sacral, yellow for Solar Plexus, green for Heart, and so on.