Sad to say, My Favorite Domer learned from an early age that Easter Egg hunts aren’t as much fun as they’re cracked up to be.

When he was but a young’un, Domer signed up to participate in the annual YMCA egg hunt.

There would be prizes. And candy. And a visit from the Easter Bunny. And fun.

Or so we thought.

The day of the hunt dawned cold (typical Midwest weather). We arrived at the park, registered, and were shown which fenced-off area the kids in his age group would comb.

When the whistle blew, the kids were off. Problem was, so were the parents.

Yep, the adults got involved in a kids’ Easter Egg hunt. They mowed down the fence and muscled their way toward the hidden eggs, knocking down little kids right and left.

Kids were crying and screaming; other parents were hollering.

Nobody had much fun.

Our Easter Egg hunts then became more tandem affairs. I’d hide the eggs; he’d find them. When he got older, he’d hide the eggs and let me look for them (but mostly, he just couldn’t stand not telling me where each one was!)

Fast-forward a few years. Domer was fifteen when a darling Sheltie came to live with us.

Too old for egg hunts.

So we decided to hold an egg hunt for the dog.

We took some treats (broken bits of Pupperoni work especially well!) and inserted them into plastic eggs. One of us went outside with the dog while the other hid the eggs in plain sight inside.

With the hiding completed, we let the Sheltie inside to search.

He LOVED it! Amid much clapping and laughing and encouragement from us, he raced around the house looking for the eggs with the treats. Finding one, he’d bust it open and scarf down the tidbit.

So that’s become our Easter tradition — a dog’s egg hunt.

No pushing, no shoving, no screaming. Everybody has fun, and isn’t that what Easter Egg hunts are supposed to be like? Here, take a look at a few of this year’s hunting photos: 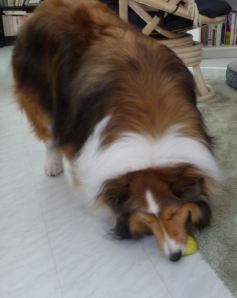 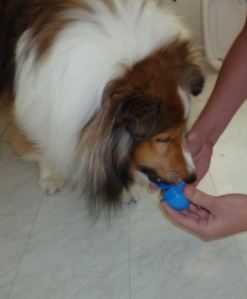 Domer helps with the blue egg