Need some help getting motivated? Perhaps a dash of courage/confidence to move forward? Or a spot of oomph to clarify your goals in the first place?

Then you need some Carnelian. 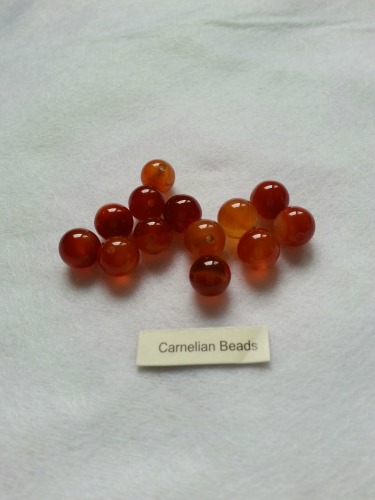 A variety of Chalcedony, Carnelian typically appears as a translucent stone ranging in color from pale pinkish-orange to deep rusty brown. Iron oxide contributes to its shades of sunset red. The name Carnelian comes from the Latin for “flesh” or “cherry.”

Carnelian has been around for more than 4,000 years. It ranks 7 on the Mohs scale of hardness (1-10). This sturdy stone accompanied ancient warriors into battle, served as an amulet and insignia ring, and was revered by the nobility. It was used to protect the dead on their journey to the afterlife.

Both Mohammed and Napoleon are said to have worn Carnelian gemstones for luck.

Carnelian is found in many countries, from Europe to South America, but the best stones seem to come from India.

Healers use Carnelian to treat lower back problems, arthritis, and depression. The stone is said to regulate the kidneys and speed healing to bones and ligaments. It can be worn as jewelry, held in the hand, or taken as an elixir. 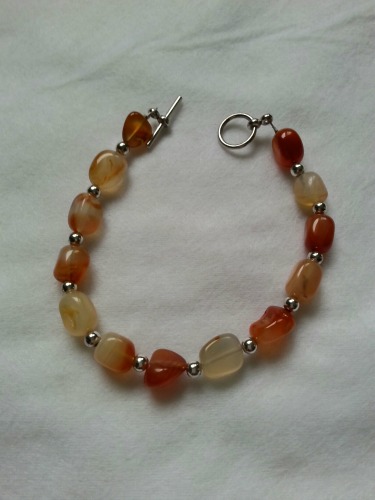 Bracelet I made using Carnelian stones

Carnelian is useful for overcoming negativity and abuse, improving concentration, calming anger, and boosting creativity (did somebody say ideal for writers?!). It’s believed to help protect one’s home from theft and fire, too.

As the first stone in the High Priest’s breastplate, Carnelian signified the blood of martyrs. According to the Bible (Rev. 21), it’s the stone in the sixth foundation wall of the New Jerusalem (called Sardius back in the day).

Carnelian is the stone of prosperity. Some of the professions most helped by it are architects, athletes, journalists, sales people, and singers.

Metaphysical healers believe Carnelian stimulates the Sacral (Second) Chakra, located just below the naval. This area is the center of the body’s Life Force. When properly balanced, the Second Chakra provides more accurate gut feelings; when unbalanced, it causes confusion and dependency on others.

Carnelian is the traditional zodiac stone for those born under Virgo (Aug. 23-Sept. 22) and historically the birthstone for August. Feng Shui practitioners believe Carnelian uses Fire Energy, Yang in nature, and as such, should be placed in the south area (fame and reputation) of a home or room.

Note: The claims here aren’t meant to take the place of medical advice. They’re based on folklore and various other sources, and likely “work” best if one’s belief is strong enough!