Then get some Moss Agate. 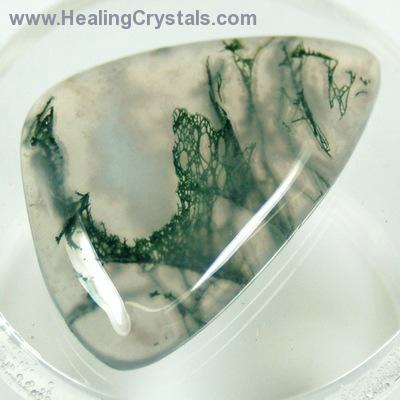 Thanks to healingcrystals.com for this photo of Moss Agate

A variety of Chalcedony (the Quartz family), Moss Agate is clear to milky white with inclusions of manganese or iron in patterns similar to lichen. It’s found throughout the world, with the best specimens from Australia, Russia, India, and the U.S.

Despite not technically an agate (because it’s not banded),  Moss Agate is a member of the agate family. Seafarers used it to protect themselves from surging waters.

Legend claims agate protects the wearer from danger and children from falls. As graceful as I am, I should have a sackload strapped to my back!

Moss Agate is a stone of wealth and abundance. It’s excellent for small businesses and entrepreneurs, gradually increasing prosperity. Keep a stone near your bank papers to encourage savings.

Many churches contain natural works of art reflecting divine images in agate. Moss Agate is believed to be the middle stone in the third row in the breastplate of the High Priest.

A stone of warriors, Moss Agate is believed to help the wearer cast aside bitterness and balance the emotions. It’s useful for convalescing after illness and enhancing concentration and perserverence. Moss Agate cleanses the circulatory and elimination systems, as well as eases the pains of childbirth.

Sometimes called the “gardener’s stone” for its usefulness in bringing about a full crop (abundance, remember?), Moss Agate lessens sensitivity to weather and environmental pollutants and promotes self-expression.

This stone is associated with the heart chakra, helping us balance ourselves within our environment. Wear it in the middle of your chest to heal emotional disharmony. 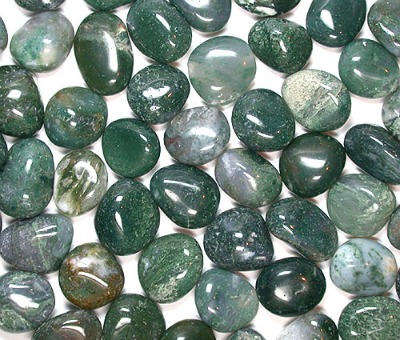 While not an established birth stone, Moss Agate is the zodiac birth stone of those born under Gemini (May 21-June 20) and the mystical stone for those born in September.