The name Rhodonite comes from the Greek rhodon (meaning “rose”). This lovely gemstone is a manganese silicate containing veins of iron, magnesium, and calcium. 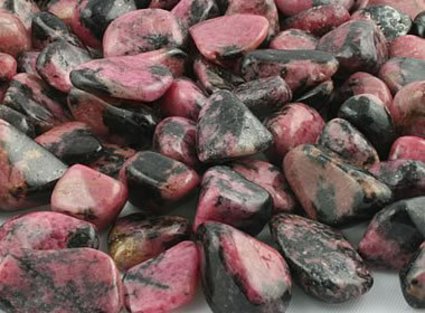 Thanks to http://www.geology.com for this photo of tumbled Rhodonite stones.

Typically rose-pink to red in color (with streaks of black), Rhodonite is found in metamorphic rocks across the world. It’s the state gem of Massachusetts and the national stone of Russia, where it was first discovered in the late 1700s.

Long ago peoples placed small Rhodonite stones in babies’ cribs, hoping the wee ones would grow as strong and free as eagles. The wife of Czar Alexander II was entombed in a 12-ton sarcophagus carved from Rhodonite. The stone became a popular gift for travelers as protection against danger. A small Rhodonite desk clock made by Faberge sold at auction in 2010 for $134,500, more than four times its estimated price!

Ranging from 5.5 to 6.5 on the Mohs scales of hardness (1-10), Rhodonite is usually tumbled or fashioned into cabochons, beads, or small sculptures.

A stone of compassion, Rhodonite clears away past emotional scars while promoting unselfish self-love and forgiveness. It’s said to build confidence, lessen confusion, and open the way for you to achieve your highest potential.

Metaphysical healers claim Rhodonite is beneficial for relationships, changing conflict into understanding. They say meditating with Rhodonite can bring your spirit back to its natural state of bliss, easing feelings of fear, panic, and stress.

It’s the modern birthstone for those born under the sign of Taurus (April 21 – May 20). 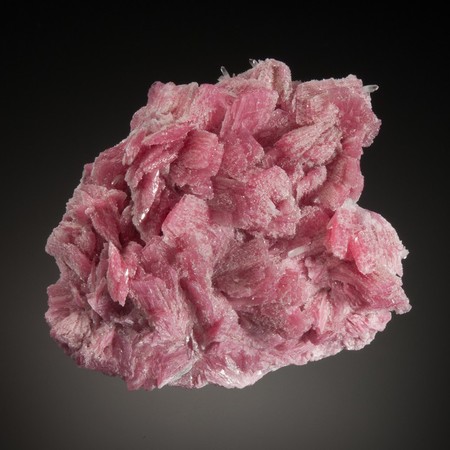 http://www.mcdougallminerals.com sold this stunning cluster of Rhodonite crystals from Peru for $500 CAD.

Feng Shui practitioners recommend placing pink Rhodonite in the southwest area of a room or home to tap into the feminine energy of growth and maternal love. Rhodonite is said to stimulate the Heart Chakra, helping us in our relationships and our relationship with the external world.

Clean Rhodonite with soapy water and a soft cloth. Don’t expose it to sudden changes in temperature, don’t wear it during physical activity, and please store it apart from other materials which might scratch its surface.