Everybody is ignorant, only on different subjects.  ~Will Rogers, American actor and humorist

Can anybody help me identify this plant: 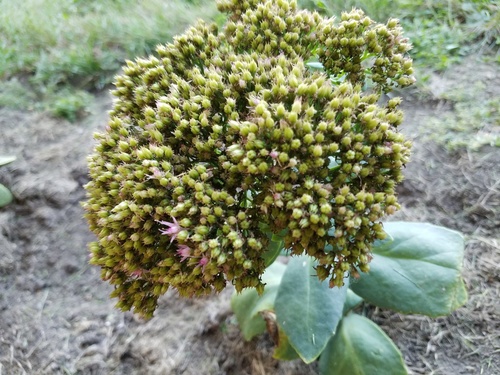 One of my friends has a dozen or so growing in various parts of her yard.

She got cuttings from a friend of hers after she noticed the plant was a magnet for butterflies.

The bees I can do without, but I rather like butterflies, and if I can plant something that helps them (and hummingbirds) to live longer, I’m in.

So my friend recently snipped off two of her plants and told me to stick them in the ground in a sunny spot.

She said I might need to water them now and again. And I might want to feed them once in awhile, too.

They won’t look pretty over the winter, she told me, but they’ll perk back up next spring.

In case you can’t tell from the photo, each plant has smooth, almost waxy, leaves and stands 8-12 inches tall. My friend said they produce masses of tiny pinkish, purple flowers during spring and summer. They don’t have much of a fragrance, and Dallas doesn’t give two hoots for them.

I’ve Googled until the Internet Watchdogs likely have me pegged as the Crazy Writer-Lady looking for “novel” ways to do somebody in via a flowering plant!

Anyway, my friend called this a Butterfly Plant, but my searches led me to see it as a Kalanchoe (kal-un-KOH-ee). Maybe it’s actually something else.

When I was in Texas, I had a friend who grew the reddish variety of what she called Kalanchoe, and they were lovely most of the year. Another friend here grew them, too, until they became so prolific that she had to thin them out.

I’m tired of being ignorant. Help me, please?