God gives every bird its food, but He does not throw it into its nest.  ~J.G. Holland, American novelist and poet

Recently, I heard a raucous jabbering outside my window and naturally, I had to take a peek.

Some people would claim that’s procrastination, that I was merely postponing the writing of my novel.

I know better: it’s an innate curiosity about the world around me, something every writer needs.

Anyway, I didn’t see much except a splotch on the grass.

Which didn’t appear to be moving.

So what was making all the noise?

I wandered outside, and this is what I found (but I’ve got to warn you, it’s pretty disgusting!!): 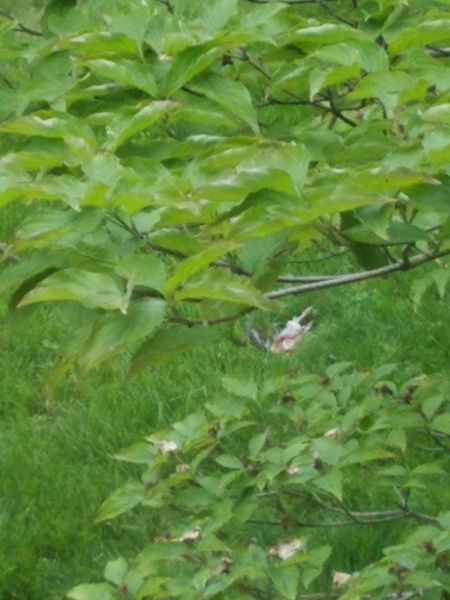 Did you see it? It was a dead baby bird.

Maybe it fell out of its nest too soon. Or maybe a cat got it.

My heart broke a little at its de-feathered condition, but I opted to leave it where it lay.

I couldn’t do anything for it, and I nearly retched at the thought of touching it.

I went back inside, and once again, I heard loud squawking (I’m embarrassed to tell you how many times I tried to spell ‘squawking’ here!)

This time, I saw this: 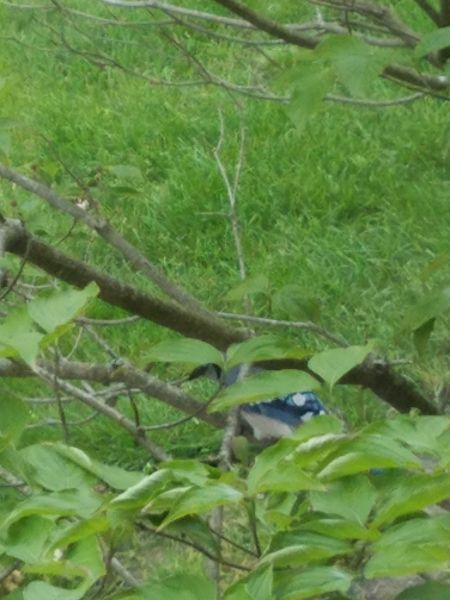 A blue jay, hunkering in the limbs of a dogwood tree.

Right over the spot where the dead baby bird was.

Okay, I thought, maybe it’s the jay’s baby, and he’s expressing frustration over its untimely death.

Maybe he’s warning other birds about a stray cat.

I watched from the window, curious how this would play out.

Suddenly, the jay swooped down toward the baby and proceeded to eat it!

I kid you not: 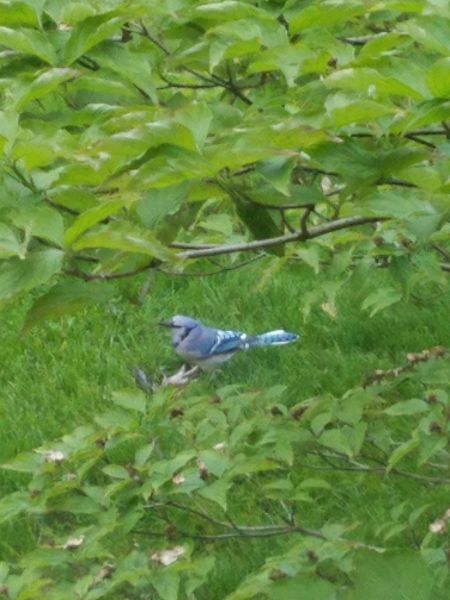 Certain my eyes had deceived me, I ran to my computer to Google ‘blue jays.’

And I learned jays typically eat insects and nuts. However, they have been known to eat eggs and nestlings of other birds.

And you can see he was quite intent on his feast.

Couldn’t have enjoyed it more if he’d whipped out a bib and napkin — and perhaps some lighted candles and dining music.

By the time he finished, I presumed he’d picked the carcass clean (no, I didn’t check!)

Eventually, I returned to my writing, convinced that jays might be pretty colored birds but I’ll stick with robins, doves, and cardinals.

Who knew Nature was so bird-eat-bird?