How is it possible for it to have been snowing off and on for the past week, without having snow on the ground??

Not that I’m complaining — well, maybe a tad because the sky has just been so dreary, and we’ve almost forgotten what the sun looks like.

Still, I’m told we’re “springing forward” an hour next Sunday at 2 a.m., and if the past is any indication, that extra hour of daylight probably will translate to warmer weather. Or so we hope!

But it doesn’t have to be sunny out to get decent pictures.

In fact, professional photographers say the diffused lighting of a cloudy day can soften the subject, especially if you’re photographing portraits.

So I went outside the other day and snapped a few shots.

The hard part was braving the freezing temperatures and the blowing/spitting snow.

Not to mention the curious stares of the neighbors — all safely tucked inside their warm homes and likely wondering, “What’s she doing NOW?”

You’d think they’d be used to it!

Anyway, here’s a round bush dotted with snow:

The snow plows which cleaned the city streets after our last big (3.5 inches) snowfall pushed the snow into deep banks along the sidewalks. Guess they figure nobody’s out for a walk anyway. Since that time, the banks have turned into sloppy balls:

And because the snow was flying fast from the North, we got a row of evergreens that look like they’ve been flocked: 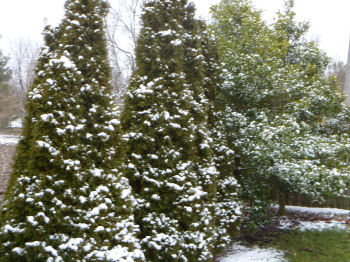 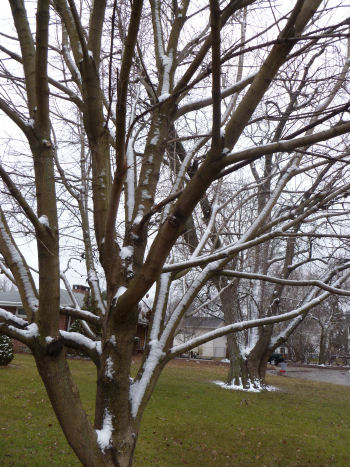 These tress are probably wondering where Spring is!

Darling Doggie Dallas accompanied me on my photographic expedition. You can see by his grimace that he’s not exactly happy to see the snow go. Every time I try to shovel it off the patio (so he won’t track wet into the house), he barks and fusses at me. Kind of like he thinks I’m the one who’s taking away all his fun!