Not long ago, this artwork showed up in one of our city parks: 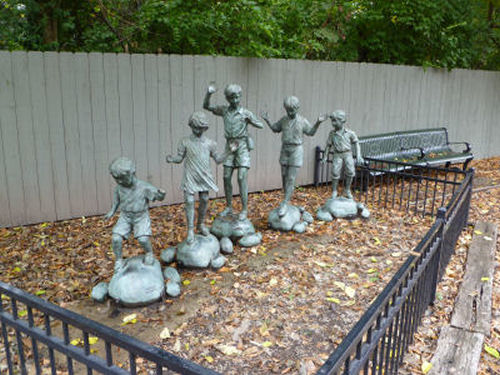 It’s fenced off, likely an effort to keep real kids from playing with statues that cost the taxpayers some money, but doesn’t it capture perfectly the lazy, enjoyable days of summers past?

I’m one of the lucky ones. I grew up in the years before computers and cell phones became MUST HAVES in the minds of kids as well as adults.

Without those “distractions,” we had to come up with other ways to spend our time. And we were plenty creative!

Some days, we’d “play school,” drawing on a chalkboard. Other days, we’d put some music on and dance ’til we collapsed in fits of giggles. We’d play with Barbie dolls, dressing them up and inventing interesting scenarios for them to deal with. We’d play board games or Jacks, seated on our cool front porch; we’d gather with neighbor kids for softball, kick ball, or kick the can; we’d roller skate throughout the neighborhood. We’d walk or ride bikes to the swimming pool or tennis courts.

Folks didn’t lock their front doors or cars then. Nor did they particularly worry their kids would get hauled off by strangers. We played outside until dark, catching lightning bugs in jars or counting stars in a clear sky.

Every year, I’d start a new “novel,” written on lined note paper with a pencil and held together with a colored ribbon through the holes. I didn’t think of it as a talent; I thought all kids did stuff like that.

Some years, we went to camp (typically music camp), where we were challenged to learn something new and meet new people.

And the food — oh, that was heavenly! Ice cream, taffy, ice-cold soda, frozen candy bars, watermelon, corn on the cob, fresh green beans and tomatoes from our own garden. Stuff we didn’t get on a regular basis at other times of the year.

In August, when stores brought out their Back-to-School merchandise and the county fair rolled into town, we knew summer was winding down and real school was just around the corner. Not that I minded so much; in fact, I remember being eager to see my friends again and smell the scents of crayons, pencils, and new books.

What are some of your favorite summertime memories?