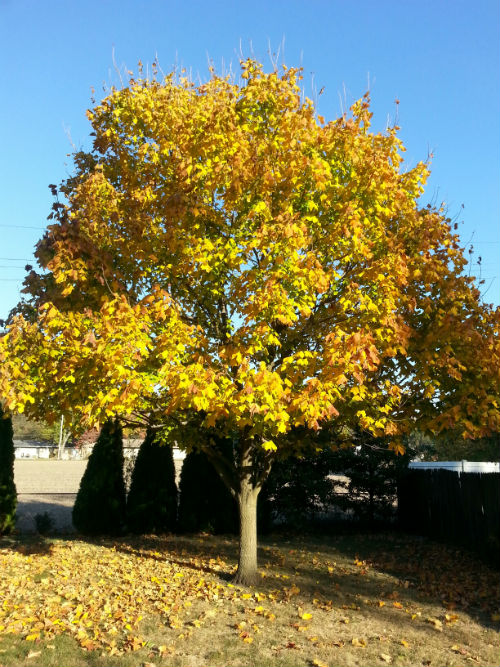 Resplendent in your dress of gold,
Lifting your arms to the birds of the air.
Tall and proud, stunning and bold,
Never a worry, never a care.

Oh maple tree touched by the sun,
Are you aware that one day soon
Your leaves will drop and you’ll be bare?
That snows and bitter winds will come
Bringing silence and quiet as winter’s tune.
Do you know, or do you care?

Note: This is written as a Horatian Ode, a poem with meter and rhyme, praising a person, animal, or object. The “object” is a Sugar Maple photographed in late afternoon sunlight.

Wherever you go, no matter what the weather, always bring your own sunshine. ~Anthony J. D’Angelo, The College Blue Book

It’s supposed to be cool in Central Illinois this weekend (50s day, low 30s night), so I wanted to show you how pretty Fall can be before the leaves drop:

END_OF_DOCUMENT_TOKEN_TO_BE_REPLACED

Better to go to bed hungry than to wake up in debt. — Proverb

The other day, I opened an envelop addressed to my business and was stunned at what I saw.

END_OF_DOCUMENT_TOKEN_TO_BE_REPLACED

The average dog is a nicer person than the average person. — Andy Rooney

You know that sinking feeling you get when you realize you’ve stepped right in the middle of a pile of dog poop?

Well, it seems some communities have found a way to crack down on nuisances like this.

END_OF_DOCUMENT_TOKEN_TO_BE_REPLACED

We don’t inherit the earth from our ancestors, we borrow it from our children. ― David Brower, author, environmentalist

You think you’re so cool
Zipping along in your rat-mobile.
Nobody would ever guess
You were raised in a barn.

That’s what it’s called, you know,
When you act like a pig.
Sad to say, even pigs act better than you,
Most times, anyway.

You think nobody saw you
As you slowed in traffic, stealthily
Lowered your passenger window,
Looked right and left and then…

Casually tossed that crumpled brown sack
Of fast food take-out into the street,
Where it rolled in the wind
And came to rest by the side of the road.

Well, somebody noticed, Buster — me,
And I’m not happy with your littering,
Dumping your garbage on city streets when
There are plenty of receptacles around.

Maybe it’s an age or gender thing,
But somebody should’ve taught you better.
And if they did, and you didn’t listen,
Then you’re a bigger pig than you appear.