The earliest diamonds were found in the 4th century B.C. in India.

The contrast of uncut diamonds with the polished, cut version in the lower right corner is striking (photo thanks to www.gia.edu (the Gemological Institute of America)

Known as the “king of gems” for its perfect structure, unique light refraction, and hardness ( a perfect 10 on the 1-10 Mohs Scale), Diamond is considered the master healer.

A sign of fidelity, Diamond never needs recharging. In fact, it’s said to enhance the properties of other crystals. It offers fearlessness, clears emotional pain, stimulates creativity, and attracts abundance.

Physically, Diamond detoxifies all the systems in the body, clears sight, treats vertigo and allergies, and thwarts poison.

Diamond is listed as the sixth stone in the breastplate of the Jewish high priest and was said to reveal the guilt or innocence of an accused person. During the Middle Ages, Diamond worn in a ring was thought to serve as an antidote to poison.

Until the middle of the 18th century, it was believed that India was the only source of diamonds in the world. But a teenager exploring a riverbank in South Africa discovered what turned out to be a more than 2000-carat diamond! Shortly after, the Kimberly Mine came into operation.

In 1880, an Englishman formed De Beers Consolidated Mines Ltd. to help control the supply of diamonds. But by that time, demand was down, as more people were choosing colored gemstones (emeralds, rubies, sapphires) for their engagement stones.

It wasn’t until 1947, when an advertising agency came up with the slogan ‘A diamond is forever’ that the popularity of the gemstone surged. Today, more than three-fourths of engagement rings sold contain diamond stones. 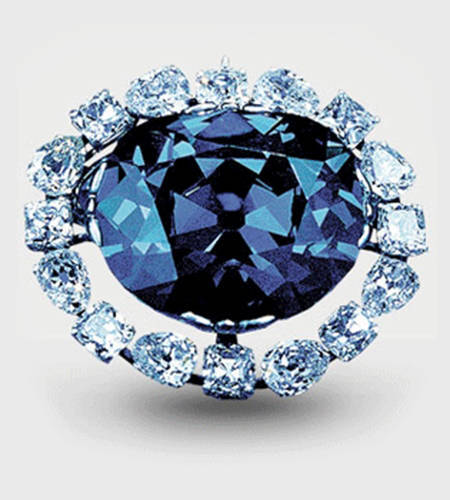 Now a resident of the Smithsonian Institution, the Hope Diamond was originally 115 carats and probably purchased in India. Reputedly cursed, the diamond has been recut to 45.5 carats. Thanks to 1stdibs.com for this photo.

Besides their function as gemstones, Diamonds are used industrially as an abrasive, embedded into metal drill bits for drilling oil wells, to enhance the performance of high-quality speakers, and in small mechanical devices. And, for those looking to preserve their loved ones after death, some companies now are turning cremated ashes into diamonds.

Feng Shui practitioners consider Diamond an “energy disperser” that should be placed in any window to act as a prism radiating light and energy.