Let me ask you something, what is not art? ~Author Unknown

Take a good look at the following picture and tell me if something seems amiss to you: 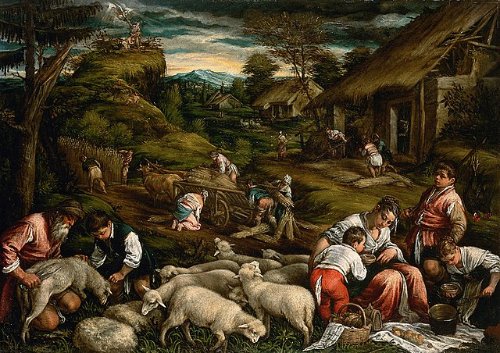 Now I’ll be the first to admit I’m not an artist, but I have taken a few classes in art and history along the way, as well as done some studying of the Bible.

And this photo is just wrong on a lot of fronts.

Some background: I came across said photo while reading a book our Church makes available to parishioners to help guide us through the Lenten journey to Easter Sunday.

Titled “Summer with the Sacrifice of Isaac,” it’s a painting by Francesco Bassano the Younger, an Italian in the Renaissance period (for him, 1549-1592). I’m able to use it here because it’s in the public domain.

Poor Francesco had some issues with hypochondria and eventually threw himself from a window to his death.

Basically, this oil on canvas depicts the story from Genesis 22 where God tested Abraham’s love by asking him to sacrifice his only son Isaac on a mountain.

Do you see that scene? Look again. I had to use a magnifying glass to find it, way up there near the top left of the painting.

And that makes me wonder why it was titled that way. Shouldn’t the title of a work give us insight into what the work is about, rather than hiding behind what I’d think should be background?

Here’s another thing: Every writer knows you don’t set a story in the early 1900s and call your characters by today’s names (Zoey, Jaxon, etc.). And it would seem to me that a Renaissance painter working on a scene that took place more than two thousand years ago wouldn’t picture his people wearing clothing like the shirt and vest on the bearded man and boy in the lower left corner either.

Didn’t people in B.C. Israel wear tunics and such?

Now look at the sheep in the bearded man’s lap. I’m guessing it’s being sheared with what looks like a pair of oversized tweezers.

Have you ever seen such a dejected face on an animal? I realize early man didn’t have electric razors, but oh my. Shearing must have taken all day.

At least Bassano spared us having to look at the blood.

But my real problem is in the lower right corner, where a woman looks to be having a picnic with three small children.

Tell me this: Were people back then born with tails? Because for all the world, it looks like that small boy (wearing pants??) has a tail.

Did the artist err? Was the tail supposed to be on the sheep? Or did he know something I don’t?

33 thoughts on “Critiquing a Painting”