It’s been a long, hard year, but things are finally looking up:

This is a Shetland Sheepdog puppy, the same breed as my previous dog, Dallas.

He’s one of a litter of five (four males, one female) bred by a colleague of the lady who bred for Dallas and is no longer breeding pups.

In January, my breeder friend and I went to look over the wee ones, and she said this was the one I needed. Something about bone structure, profile, and more technical stuff I didn’t really understand.

All I knew was, the moment she put him in my arms, he melted into me. Our hearts started beating in time together. And I was hooked!

Who wouldn’t be, looking at his sweet face? 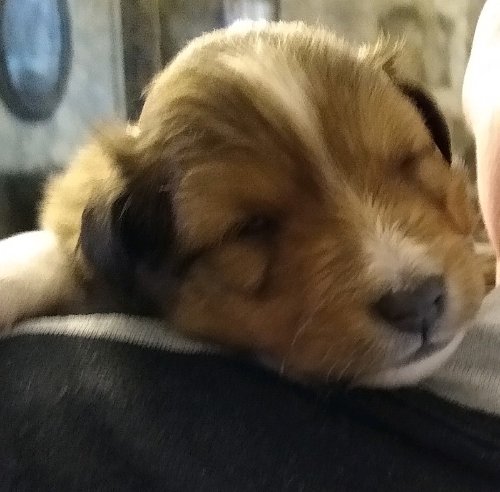 Puppy melting into my shoulder

He was only two weeks old — his eyes were barely open — and he couldn’t leave his fur-kin for several more weeks. Besides, there was no guarantee he’d be mine.

AKC breeders have the final say on pet puppies. After reserving the ones they want to “grow out” for show or breeding, they examine their list and try to match a pup with the home that would be right for it.

I assured her I wanted one before we left.

Then came the long waiting period — trying to prepare heart and home for the new addition. I prayed it would be crystal clear which was the perfect pup for me.

And I felt confident we’d know. The pup would tell us.

In mid-February, after our latest snowstorm, my breeder friend and I returned for another look.

This same pup seemed to recognize me! He rose to his back legs in the whelping box, demanding I pick him up and hold him.

And once again, he melted into me. Claimed me. Fussed when I dared to put him down.

Dallas’s breeder suggested I hold all the pet puppies in case another one might fit me better, but not a one of them showed much interest in me. Putting them in my arms resulted in their squirming to get back down.

Even another litter from another mama-dog reacted that way.

I’d have had my feelings hurt if not for for the obvious — Puppy had picked me!

Several breeders had gathered that day for the assigning of pet puppies, and they all agreed — this was my pup.

And since he’d just turned nine-and-a-half weeks old, I was told I could take him home.

I’m calling him Sullivan, “Sully,” which is based on an Irish surname meaning “little dark eye.” A strong and fitting name, I think.

We’re kinda busy around here, what with house training, teaching him manners and basic commands, introducing him to his new vet, and growing him into a good dog. I’ve been told the puppy you have at four months is the dog you’ll live with the rest of its life, so this is a crucial period.

On top of all this, my son Domer is coming home next week, so we’ll be even busier, if that’s possible. I’ll do my best, but I might be AWOL from the blogosphere for a little while, okay?

In the meantime, please enjoy some of Sully’s baby pictures: