A man should never be ashamed to own he has been in the wrong, which is but saying… that he is wiser today than he was yesterday. ~Alexander Pope, English poet 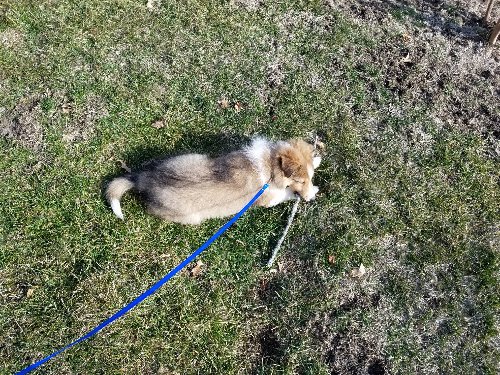 Sully, working on carrying a stick and leash-training

I’m not sure where I got the idea I was supposed to use Puppy Pee Pads to house train a dog, but I’m here to tell you … DON’T!

When I brought Dallas home many moons ago, he was practically house trained. No Pee Pads were necessary, and accidents were few. Right from the get-go, he understood “outside” was the potty place.

Not so with Sully.

His breeder hadn’t bothered with house training, so I opted to use Pee Pads left over from Dallas’s time.

I put them in his ex-pen and beside three doors.

They were a nuisance — poor absorbency, poor feel compared to the newspapers he’d gotten used to from the whelping box, and he refused to use a soiled one … even if it only had a teaspoonful of liquid on one corner.

At first, I thought it would be easy to train him to the pad — convenient in inclement weather, too — and then transition him to outside when the temperature warmed a bit.

Sully quickly learned that pottying on a pad brought a treat while going on the floor resulted in an angry “No!”

But the transition to outside puzzled him.

And why shouldn’t it? Learning it’s okay to pee inside on a pad, then having to relearn that it’s better to go outside in the grass could only confuse a wee pup.

Then my son Domer came home for a week-long visit, and all bets were off. Sully turned into a real brat, pottying anywhere and everywhere. And I was spending so much time on my hands and knees cleaning his messes that I felt I was ignoring Domer.

I called Sully’s vet to ask about him peeing so much. I was instructed to stop giving him unlimited water.

What was going on? Was I the village idiot for not being able to house train a dog?

This time, the vet wanted a urine sample. And this time, they told me the poor pup had a bladder infection.

Here I was, fussing at him for his failure to follow the potty training regimen when he was sick and couldn’t help it.

I beat myself up over it, then got him started on antibiotics.

But it’s been a LONG haul.

At least I’m learning he’s got a brain in that cute, fuzzy head of his!

"I would advise anyone who aspires to a writing career that before developing his talent he would be wise to develop a thick hide." -- Harper Lee
Loading Comments...
Comment
×