When life gives you a hundred reasons to cry, show life that you have a thousand reasons to smile.  ~Author Unknown

What’s a homeowner to do when landscaping doesn’t go the way it’s supposed to?

When trees that are supposed to grow tall, don’t? When things planted as trees become shrubs instead?

END_OF_DOCUMENT_TOKEN_TO_BE_REPLACED

Of all the seasons, autumn offers the most to man and requires the least of him. ~Hal Borland, American author and journalist

This past weekend was spectacular, just perfect for a long walk outdoors. Come with me, and I’ll show you some of the gorgeous Fall colors in Central Illinois!

We’ll start with a glorious maple in a red dress:

END_OF_DOCUMENT_TOKEN_TO_BE_REPLACED

I call it the annual “Raping of the Trees.” Here’s what it looks like: 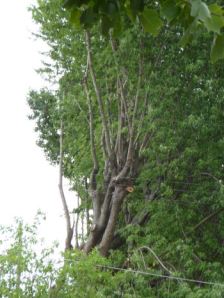 What happens is some tree service — probably under contract with a utility company — arrives at your neighborhood early in the morning and starts “trimming” the branches from trees located beneath or near power lines. The service stays all day, hacking off branches and grinding them up, then moves to the next site.

I understand the reasoning behind this — eliminate anything that could possibly interfere with the operation of utilities, thereby saving crews the headache (and danger) of having to make repairs during stormy weather.

But the tree service obviously doesn’t have a designer on staff. I mean, look at the mess they made of these once-lovely trees:

Limbs have been chopped off at random, without regard for the tree’s former symmetry. Gaping holes remain where thick, leafy branches used to shade yards. Skeletal sticks poke their spindly fingers up to the sky.

If the tree was in the way, why didn’t they just chop it down, rather than gouging its branches out?

Trees are living, breathing creations, many of which were lovingly planted and tended by someone from a past generation. Their arms cradle birds’ nests, provide shelter for squirrels, and offer a spectacular show in spring and fall. They shade pedestrians and parked cars while increasing property values.  Trees absorb carbon dioxide and pollutants while giving off oxygen.

We need trees. Our communities are kinder, friendlier when we have trees around. And I suspect many of these trees were there before the utility lines were even put up.

So while it’s bad enough this “Raping of the Trees” takes place during good weather, I find it reprehensible for it to happen this year.

When the trees are already stressed out by the heat. And the drought.

I don’t look for fall to be its customary colorful self, nor can I see these spindly specters withstanding the ravages of winter.

They can blame that on the weather all they like. But I think the “Raping of the Trees” will be a contributing factor.

Do they do this in your neck of the woods?