When I was an infant, I was christened with the middle name of “Anne.”

“Anne” means “grace,” and I can only suppose my parents hoped their daughter would turn out graceful.

Sadly, I did not.

In fact, if there’s any way I can possibly fall over something, I manage to do just that.

Take my freshman year in college, for example.

I was lugging a heavy suitcase down the stairs of my dorm in preparation for catching a ride to the airport and a flight home for Thanksgiving.

Somehow I slipped, toppled down a few steps, conked my head on the landing’s window sill, and instead, was rushed to the hospital — nine stitches later, I was back to my travel plans.

Then on my second reporter’s job, I was returning to the office after covering a meeting, when I tripped in my platform sandals — a few stitches later, I was back to writing, my arm in a sling.

I’m all too familiar with the feeling of being upended. Feet flying out from under me. Missing a stair and landing on my bottom. Tripping up and down curbs. Letting the trash can get the better of me.

A couple of days ago, I was walking Dallas — thinking about my deep-edit — when I encountered this:

One concrete block noticeably lower than its neighbor. To the tune of about two inches, I’d guess. 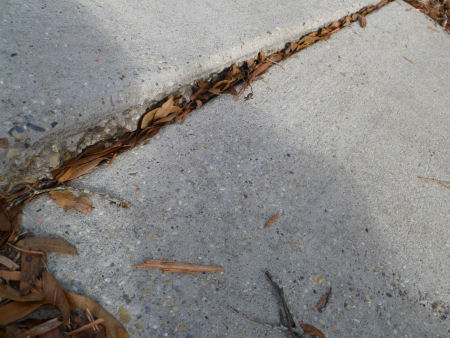 An accident waiting to happen!

Well, I stubbed my toe on the taller part and promptly pitched forward onto the concrete.

I even dropped Dallas’s lead, but the little angel stayed right there with me.

My palms, upper arms, and one knee caught some of the brunt.

They’re bruised and sore. No scrapes, no blood.

But slamming my cheekbone onto the sidewalk and bruising a rib? That’s a whole new level of pain (even worse than childbirth!)

(At least I think it’s a bruised rib. The treatment’s the same whether it’s bruised or cracked.)

So every time I move or cough or blow my nose…

And I don’t even want to think about sneezing!

It’s going to be a long month, trying to heal from this — Domer calls it “riding the struggle bus.”

Still, I think I’m going to like walking — when I learn how to do it!