Don’t you hate it when one of your blogging friends drops off the face of the earth for a while without any explanation whatsoever??

I’ve been AWOL for about five days now, but I have a reason.

It was my birthday, and my son Domer had BIG PLANS for the two of us!

Two tickets to the home opening football game between Notre Dame and Texas on Sept. 5! (Bought with his own money, I might add — cool, having a son who’s gainfully employed!)

The Notre Dame campus is spectacular at any season, but especially during home football games. This is one of the Quads: 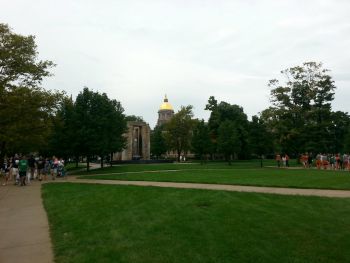 After a harrowing drive to campus in a torrential thunderstorm, the sun finally broke through, illuminating the Golden Dome on the Main Building: 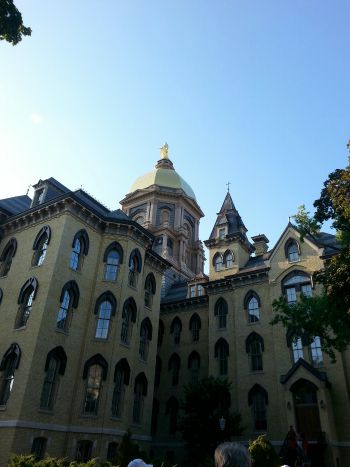 This was a night game, and we knew we wouldn’t get back until very late (making rising early for Mass a hardship). Never fear, Notre Dame had that covered. What’s more Catholic than attending Mass at the Basilica right on campus before kickoff? 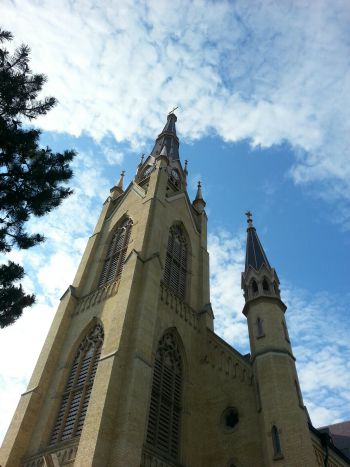 Domer is an alum of the trumpet section of the Band, so naturally we had to see Trumpets in the Dome. Both of us were blown away by their awesome sound, this early in the season, too: 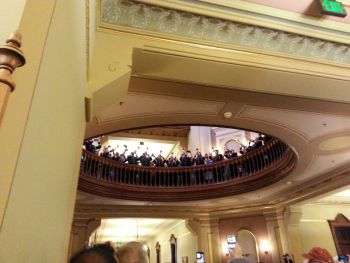 Soon, it was time for the Band of the Fighting Irish to march out to the stadium, led by the iconic Irish Guard:

General admission tickets at Notre Dame are awarded based on random selection. While we had some Irish fans seated near us, the majority of our section was comprised of Texas supporters. No matter. Everyone was congenial. No fights, just lots of good natured taunting and bragging: 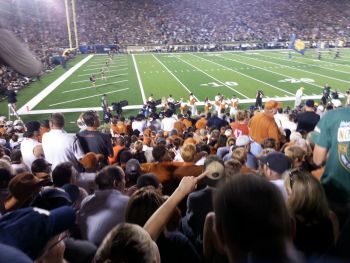 Then the Notre Dame Band took the field at halftime: 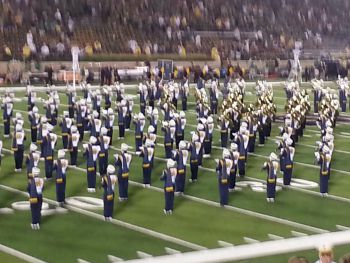 And when all was said and done, the Irish came out on top (substantially, I might add!):

No birthday is complete without a cake, and I got TWO!! One from Domer, picked out with my favorite colors of blue and green: 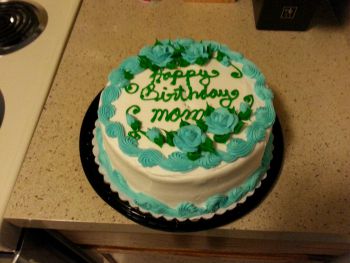 And the other when I got home, thanks to my dear Mom:

So, what did you do over Labor Day?!?