Most of us think of Garnet as being a blood-red gemstone that’s the birthstone for January.

But did you know Garnet comes in lots of colors, ranging from pinks and purples, to oranges, browns, and vibrant greens? I didn’t either. 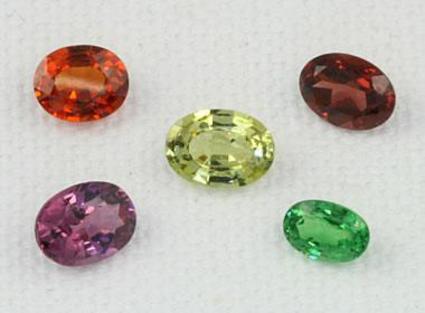 Orange, yellow, red, green, and purple African Garnets. Thanks to http://www.geology.com for this photo.

Ranging around 7 on the Mohs scales of hardness (1-10), Garnet is a sturdy mineral, popular in jewelry and boasting a long history going back 5,000 years.

The word “garnet” is thought to come from the uncut stone’s resemblence to pomegranate seeds.

Africa is the source of the world’s largest supply of Garnets, though other sources include India, the Soviet Union, Brazil, and the U.S.

Ancient Egyptians prized Garnet and included these semi-precious stones in the tombs of Pharoahs for enjoyment in their afterlife. Ancient Romans carved Garnet into signet rings. Asiatic peoples wore them for protection and used them as weapons. Christians and Muslims used Garnets as talismans during the Crusades. A red Garnet was included on the breastplate of the Hebrew High Priest. And it’s said that Noah used a Garnet on the ark to light its way. 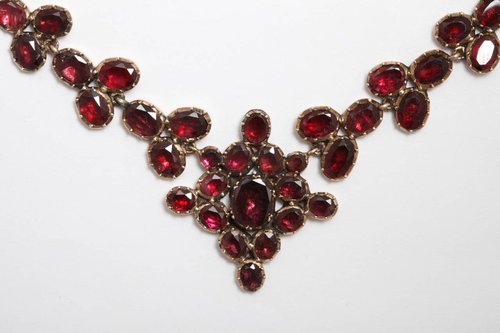 Check out this stunning Georgian Garnet necklace, circa 1820 from the United Kingdom. Price: just over $8,000. Available at http://www.1stdibs.com

In addition to its uses in jewelry, Garnet has found a purpose in watch gears, scientific instruments, sandpaper, and abrasives.

Garnet is traditionally given for a second wedding anniversary.

Feng Shui experts see red Garnet as fire energy, which should be placed in the south area of a home or room. Garnet is associated with the base chakra, the foundation for the body’s physical and spiritual energy. An out-of-whack base chakra manifests in low energy and enthusiasm, self-doubt, and immune system disorders.

Set at least three Garnets on your desk to improve your business. Put some beneath your pillow to cure depression and ward off nightmares. Boost your popularity and self-esteem by wearing Garnet jewelry. Garnets are said to provide protection on trips and bring constancy to friendships.